Reviewed and Rebooked at the International

'... you won't listen to the Sony 'On Stage' release ever again after hearing this ...'

'Rebooked at the International' promised to be the ultimate January/February 1970 engagement package.

Let's start with the packaging, in the video below you can see as we go through each of the 100 pages [While disc 3 plays in the background] : [Note The camera used only records in mono]

It is a literally perfect presentation, along the lines of the 'Close Up' set released by Sony BMG some years ago, only of much greater quality when it comes to securing the 100 page book in place.

The main attraction with this release is disc 2 and 3 containing the multi-track recordings by RCA including unreleased leftovers that did not make the 'On Stage' album. Disc 2 contains the original rough mixes made by Felton Jarvis in early 1970 in preparation for the up-coming 'On Stage' album. No repairs, No overdubs!, released in its original form here before studio overdubs were added. The tracks are unedited, with extra long unedited dialogue in between songs that also were never included on the album.

Disc 3 features the left over tracks that never made it to the album. And here we see the release of many songs in multi-track form for the first time, along with some previously released material that was recorded from the same shows. All directly from the multi-track tapes.

On both discs we get superb sound and more of a concert feel with much Elvis dialogue originally cut - here for the first time. Disc 2 is perfect, you won't listen to the Sony release ever again after hearing this.

Disc 3 is just as good. At one point there are some static problems which Elvis comments on and they work to remove that. [And you can listen to some of this below] Overall the sound is top notch, you won't be wishing for more. You will be playing this after disc two and just be totally in awe.

Then we have two soundboard concerts on disc 1 and 4, the opening and closing shows. Both are of very high quality, especially for soundboards of this time period. The first soundboard features a very rare True love Travels On A Gravel Road and the 25 songs on the closing night show make for an amazing tracklist.

More on these CDs below.

With all the added unreleased dialogue in between the songs on discs 2 and 3 accompanied with Rehearsal tracks from the engagement, and all in perfect sound quality you have the most complete and compelling collection ever assembled on this, Elvis' second coming to the International Hotel. Indeed, as claimed, for the first time included in the accompanying 100 page hardback book, are such photographs never before seen in beautiful quality accompanied with extensive liner notes and hard facts. Limited to just 1000 copies.

Review #2 : In Depth by KingOfTheJungle

Design: This package is simply stunning. Industry standard longbow 4CD set, with a beautiful matte finish cover, and a 100 page book that features some incredible shots of Elvis from February 1970. More than a few are previously unseen (and man there are some beauties there), but even the ones we've seen before are in such good quality they have to have been scanned from original negs (Or very, very, very clean prints). Beautiful. My only complaint with the book is that they have an autographed matchbook on page 61 that is a fake (Tsk, tsk. Get an expert to vet these things, Backdraft!) Ok, on to the good stuff, the music:

Those of us who were introduced to this show from Fort Baxter's releases are very familiar with the overdriven, distorted nature of this tape. If I had my druthers, it would have been recorded on multi-track, but such is not the case. Madison's release used some technical computer wizardry to reduce the amount of distortion present, but the overall effect left the tape sounding a bit flat and muffled. Backdraft's release clearly seems to be from a better generation than the Baxter/Madison releases. It's a cleaner, crisper, more 'in focus' sound. However, they opted not to try to digitally reduce the distortion ala Madison, so there is still quite a bit of it present (though it is less severe than the old Baxter releases). Your opinion of the sound of this release will most likely be shaped by your tolerance for mike overload. If you want less of it, and are ok with a flatter overall sound, you'll be happier with the Madison. If you can handle the distortion in the interest of the cleanest sounding transfer of the show, Backdraft wins.

So the big question about this disc is: are these the mixes that were on the bootleg 'Good Times Never Seemed So Good' or 'Pure Stage Power'? The answer: No they are not. They are quite different in fact.

From the evidence available, I think the mixes on Backdraft's second disc are an earlier working mix than the ones that appear on GTNSSG. The presence of I Can't Stop Loving You in place of the two 1969 tracks and the extra, unreleased dialog would seem to indicate this, as well as the fact that the mixes on the acetate have a slightly more polished, less raw feel. That being said, Backdraft's source sounds like an original rough mix tape.

And the overall sound is excellent.

This disc sounds fantastic. And the performances are fantastic (but it's Elvis in Feb. 70, so we knew that already, right?). One of the things I wondered about is whether the Polk Salad Annie from Feb 18th DS would wind up being the same one that appeared on 'Behind Closed Doors' labeled with that date, and BCD erroneously labeled dates on a few other acetates that we know of. The producers' press release seemed to indicate that it was unreleased so the question was: Is it unreleased, or unreleased from a tape source? To my great delight, it is not the BCD version, but a totally unreleased (and excellent) one.

One of the things I noticed while spinning this CD is that the tracks from Feb 19th DS that appeared on FTD's Polk Salad Annie sound much better here than on the FTD release [Polk Salad Annie].

I don't know if it's Ferrante's mix or Lene Reidel's notoriously poor mastering choices, but Proud Mary specifically benefits incredibly from Backdraft's version. Elvis vocal focus and passion, and the ass kicking rock of the TCB band here are brought into a focus that was unfortunately missed on the FTD, this is brought into even greater clarity when you hit track 20, the beginning of the 'bonus' tracks. It's quite obviously cribbed from the FTD (tsk tsk), and doesn't sound nearly as good as the material that preceded it.

Once again, the source tape sounds crisper than the versions I've heard before. No overload distortion problem this time, though. Sounds like the producers have added a touch of digital echo to give it some 'ambience'. Some purists are shire to shake a reproving finger, but it sounds pretty good to me. Not overpowering, just enough to liven up the sound a bit. Overall I think this is my favorite presentation of this show yet released.

I am incredibly glad I took the plunge and invested in this release. The content (released and unreleased) is top notch and presented well, and great care was obviously taken in packaging, graphic design, and acquiring rare photos (and excellent sources for them). They don't come around like this every day.

This is a release worthy of the engagement it represents. 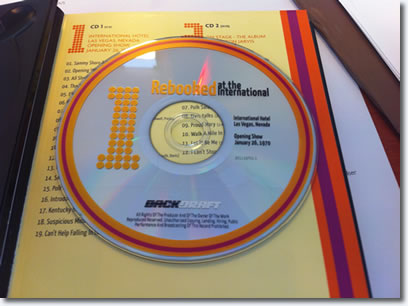 CD 2 (Unreleased in its original form) 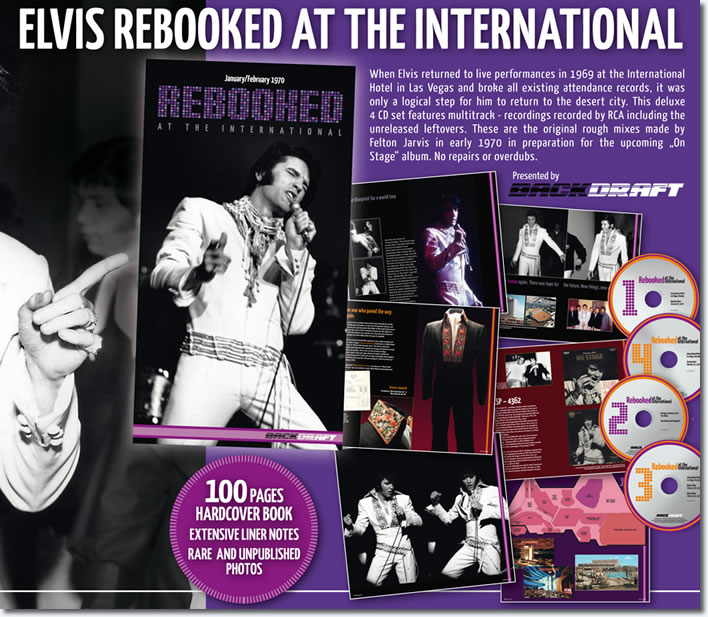 No part of any article on this site may be re-printed for public display without permission.

Never before have we seen an Elvis Presley concert from the 1950's with sound. Until Now! The DVD Contains recently discovered unreleased film of Elvis performing 6 songs, including Heartbreak Hotel and Don't Be Cruel, live in Tupelo Mississippi 1956. Included we see a live performance of the elusive Long Tall Sally seen here for the first time ever. + Plus Bonus DVD Audio.

This is an excellent release no fan should be without it.

The 'parade' footage is good to see as it puts you in the right context with color and b&w footage. The interviews of Elvis' Parents are well worth hearing too. The afternoon show footage is wonderful and electrifying : Here is Elvis in his prime rocking and rolling in front of 11.000 people. Highly recommended.

Where do I go from here?